For want of a better title, Ray Blank is the Editor of Sci Phi Journal. That mostly means he is responsible for paying SPJ’s bills, though he also gets the final say on which stories and articles are published. His chief qualifications for the job are that: he has read more than three books about philosophy; he has read more than three science fiction novels; he studied the philosophy of science for a while; and that nobody else volunteered for the job. He had a few short stories published before he took over Sci Phi Journal but may never find time to write again. Readers will have to decide for themselves if this is a tragedy or a blessing. He also does other things that have nothing to do with Sci Phi Journal but assumes this will be of no interest to most readers.
Ray Blank is just a pen name, and a while ago some self-important insular multiple-award-winning SF saddos hatched an ingenious plan to dox his real name and identity. This involved running samples of Ray Blank’s writing through IBM Watson and then comparing the results to texts written by the ten most evil men in history. Unfortunately for them, this did not demonstrate that Ray is the genetic clone of Adolf Hitler, but instead proved that they are imbeciles. Their plot was foiled when it was discovered that Ray Blank’s real identity has never been a secret. 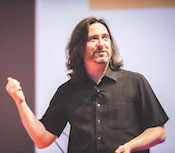 If more proof is needed that people can use pen names without trying to hide their real identity, here is a photograph showing Ray Blank talking to a lot of people about something other than philosophy, science, or science fiction.
As a sometime logician, Ray is glad that Sci Phi Journal is now compliant with Godwin’s Law. He hopes that other contributors will respect that this milestone has already been achieved so will not feel the need to replicate his efforts.

You can find out more about which cookies we are using or switch them off in settings.

This website uses cookies so that we can provide you with the best user experience possible. Cookie information is stored in your browser and performs functions such as recognising you when you return to our website and helping our team to understand which sections of the website you find most interesting and useful.

Strictly Necessary Cookie should be enabled at all times so that we can save your preferences for cookie settings.

If you disable this cookie, we will not be able to save your preferences. This means that every time you visit this website you will need to enable or disable cookies again.